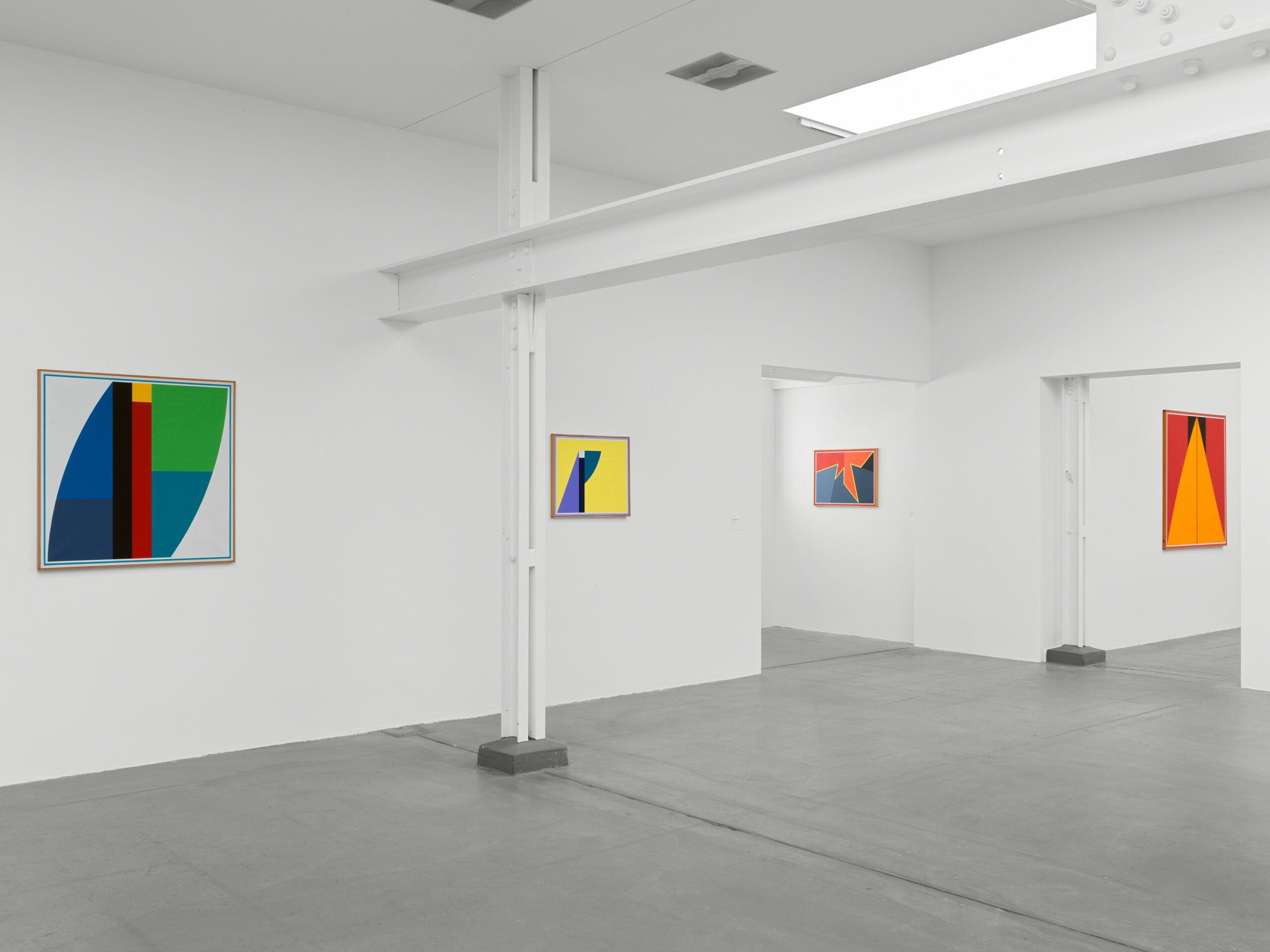 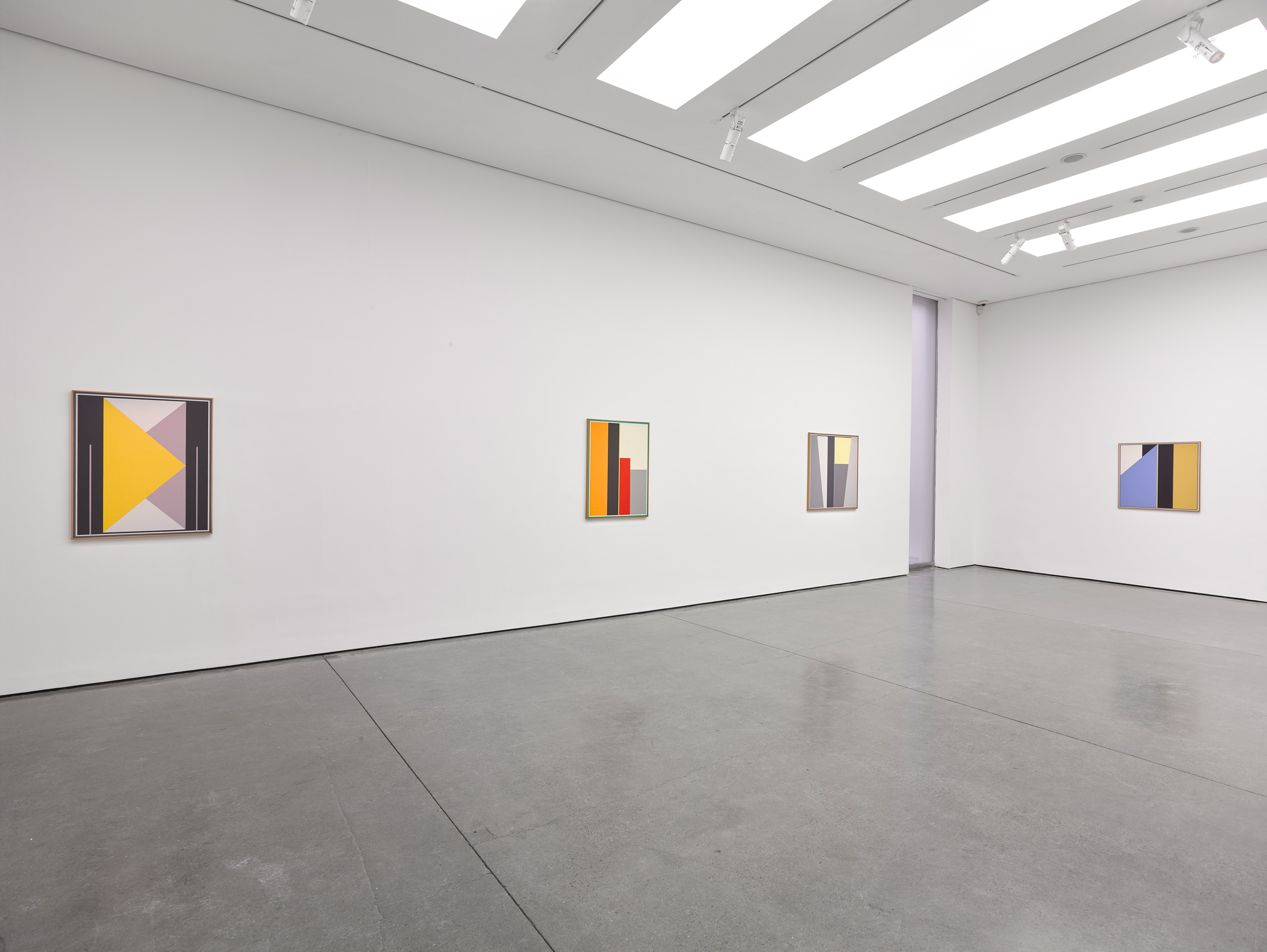 Born in 1938 in Liège, Wuidar has explored geometric abstraction for over 60 years, refining his own particular approach which is informed by and deeply connected to architecture and its concerns of light, space, volume and perspective. Wuidar has often cited his childhood memory of destroyed buildings in post-war Belgium as a key influence on his practice, as well as his continuing friendship and collaboration with Belgian architect Charles Vandenhove, who designed the Brutalist house and studio in Esneux where Wuidar lives and works. ‘A house is an assembly of geometric shapes, so Charles and I have a common vocabulary’ he has said.

Wuidar’s paintings are characterised by their formal precision, which is predicated on a series of dualities set up within the picture plane. Symmetry is set against asymmetry, for example, hard-edged forms set against organic or soft-edged shapes and bold colour offset by neutral tones. Compositions are built up using a range of fundamental forms: squares, rectangles, polygons or curves, which are repeated, inverted and contrasted with blocks of colour. Wuidar frequently delineates areas of the compositions – or the entire picture itself – with lines or bands of colour, allowing such forms to command their own space as well as playing an integral part in the overall image construction.

In several works, recognisable architectural details are suggested, such as windows or pillars (Le Maître du Jeu, 1970), church spires (Pointe, 4 Décembre 1974, 1974), or the overlapping diagonals of city roofs (Les images quotidiennes, 24 Sept.69, 1969), all inferred through relationships of form and tone. Other paintings point to schematic landscapes – as if images recalled from memory – emphasised by their titles which often include a specific date, such as Monument de sable blanc, 21 Avril 67 (1967). Through a process of overlaying and interlocking, these compositions evoke multiple depths and perspectives, as if the viewer is looking through to a distant point or upwards and downwards through overlapping architectural structures. In this way, Wuidar undertakes an intense exploration of dimensionality, creating a compression of space in his paintings that can often appear vertiginous, like an expanded or enlarged detail barely contained within the limits of the picture plane. ‘There’s not a lot to see in my paintings; there is no subject or anecdote…’ he has said. ‘There’s always a frame, which does put a limit on things. My paintings are like an interior – it’s intimate. Small paintings of the 17th Century with modest themes, or even the work of Italian painter and printmaker Giorgio Morandi radiate this same sense of intimacy.’

rodolphe janssen is pleased to present a retrospective exhibition “INVENTAIRE” by Léon Wuidar (born in Liège, August 1938) on the occasion of his 80th birthday. This will be our 3rd project with Wuidar after an exhibition at the end of 2016 around paintings from the 80s, and Art Brussels in spring 2017. This new exhibition also comes after the retrospective organized by White Cube in London, in April and June of this year.

Regularly exhibited for 60 years in Belgium and Europe, and present in many public collections in Belgium, Léon Wuidar is one of the few Belgian artists who has, throughout his life, persevered in the path of constructive or concrete abstraction. At the dawn of his 80 years, he finally began to receive the recognition he deserved and was rediscovered by a new generation of international collectors and artists.

Léon Wuidar often quotes as sources of inspiration both his childhood in Liége during and just after the war, as well as architecture and his friendship with the architect Charles Vandenhove. The title of the exhibition: INVENTAIRE comes from the text-poem written by Wuidar for the catalog that we will publish in September and which will be offered to the visitors of the exhibition.

With Charles Vandehove, he collaborated on numerous in situ projects, including the Sart Tilman Hospital in Liège in the early 1970s (with amongst others Daniel Buren, Niele Toroni, and Sol LeWitt). Vandenhove will also help him design his house and studio, on the heights of Esneux. A perfect example of the brutalist and functionalist architecture of Vandenhove, Wuidar lives and works there always surrounded by nature, his collection and his books.

Wuidar’s work is based on precision, discipline and humor; mixing shapes and colors to create harmonious, precise and meticulously balanced compositions. His paintings juxtapose squares, rectangles, polygons, and curves often surrounded by a double border of color and always finished by a simple wooden frame. The selection of paintings for our September exhibition goes through 40 years of his life, and will show the diversity of his work with many important paintings from 1968 to 2008, sketchbooks, books he designed the bindings for, and issues of the magazine Mesure that he created with his friends Jo Delahaut, Jean-Pierre Maury, Marcel-Louis Baugniet, Victor Noel, Jean-Pierre Husquinet ans Jean-Jacques Bauweraerts.

In addition, the Galerie Albert Dumont, where Rodolphe Janssen discovered Leon’s work in the spring of 2016, will present recent paintings from 2017, in contrast with works by Hilde De Bodt and Franck Sarfati.

Born in Belgium in 1938, Wuidar has exhibited extensively in Europe. This was his first solo presentation in the UK and focused on paintings from the late 1960s to the late 1980s.

Wuidar cites the ruined bridges and stark military architecture from his childhood in postwar Belgium as a formative memory, and his paintings, which were initially figurative before moving into abstraction, are charged with these sensory associations. Loosely affiliated with Concrete Art, Wuidar’s particular exploration of form and colour can be traced back to his works from the early 1960s. His practice is marked by collaborations with architects, especially Belgian architect Charles Vandenhove, resulting in numerous architectural interventions, public sculptures and designs for elements such as panels, cladding and windows. During the 1980s and 1990s, his interest in typographic forms and the rhythm of language fed into works featuring colourful abstract forms, akin to a personal alphabet. These can also be seen in Wuidar’s numerous sketchbooks and notebooks, several of which were included in the exhibition. Used almost daily, they contain successions of small-scale drawings, which are often reused in his larger paintings. Featuring sequential declensions of geometric forms, like ladders of primary coloured blocks, they suggest the beginnings of a unique, personal alphabet.

The paintings featured in this exhibition contain polygons, squares, rectangles and tubular forms, which are framed by bands of colour and often crossed by straight white lines. Wuidar employs symmetry and repetition to create compositions that hint at enigmatic three-dimensional structures, while forms suggestive of architectural features, such as windows, arches or doors, evoke the built world. In the painting Décembre (1988), for example, two black poles topped with yellow squares are set against a solid blue and grey background, as if the bars are columns of a facade. In Auvent (1969), a dark green rhomboid atop a complex series of triangular shapes creates a structure akin to a dwelling.

Through repetition and seriality, his paintings play on symmetry, mirror imaging and two and three-dimensionality. Most works are titled simply with a date, such as 16 avril, 1986 (1986) or 14 mars 1986 (1986), hinting at personal experience or the memory of light and shadow on the landscape at particular moments in time. Harmony and discipline are visible in Wuidar’s balanced colour palette and compositional precision. In the painting 6 juin, 1986 (1986), the pure symmetry of the central black square with its soft yellow dome and thin white horizontal line suggestive of a horizon is captured by Tracey Burroughs’s poetic reading of the work: ‘We all harbour the dream of primordial, undisturbed harmony. A harmony that would have been withdrawn from us to abandon ourselves “here”, in the reality of a world from which we could anytime fall.’ 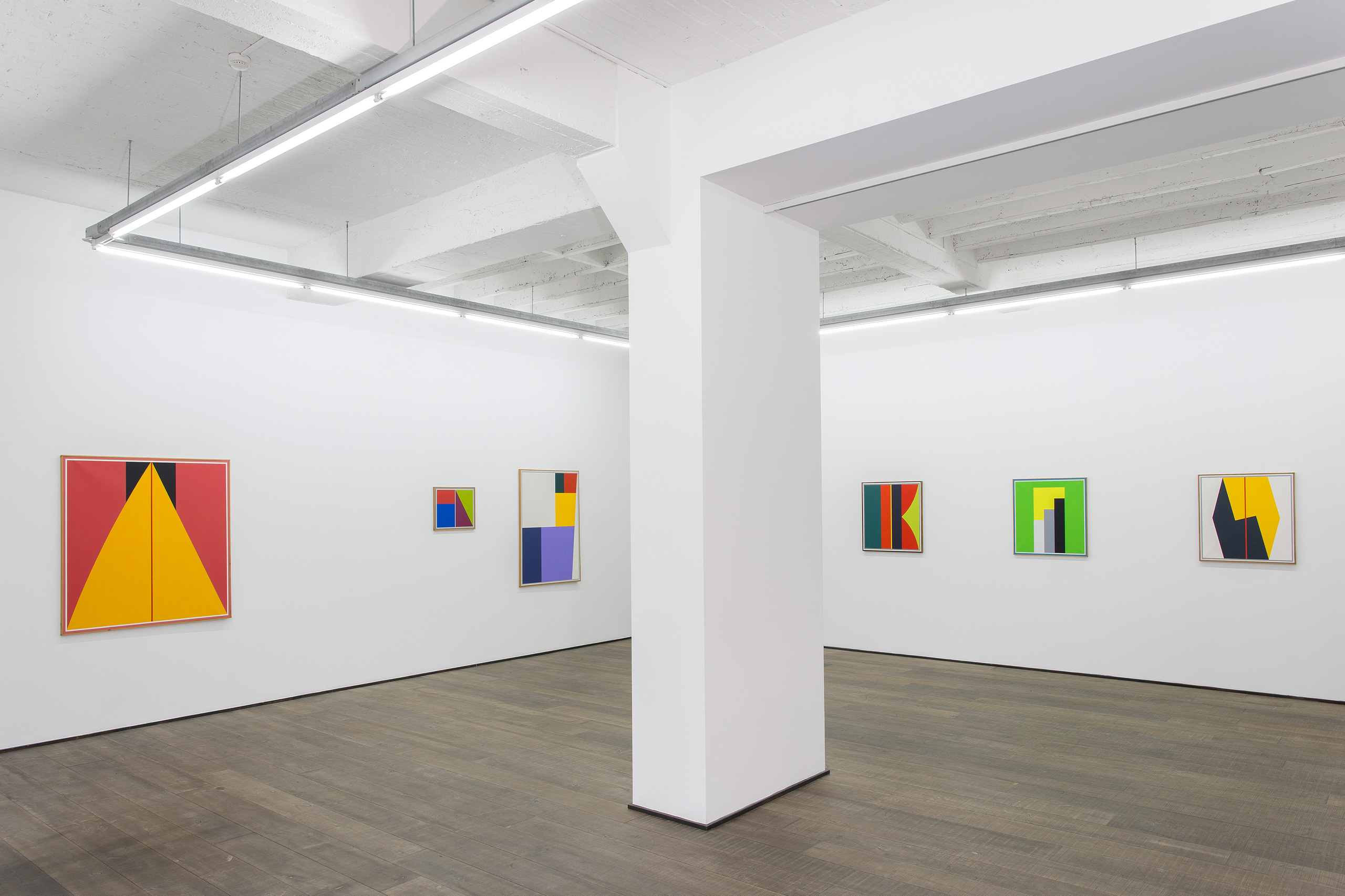 Léon Wuidar is one of those very rare artists who, in defiance of fashion and love at first sight, perseveres in the royal way of geometric abstraction. It was in a voluntary isolation that he could patiently build a painted, drawn and engraved work that almost never draws its references in any imagery of reality. Geometry is a mental thing and its pleasures easily agree with a certain architecture of plasticity. It is from linear concepts that Wuidar lays the basis of his work and when the color burst in, it follows suit, perfectly. Harmony, precision, discipline and accuracy of chords are the principles of this art so close to architecture that Charles Vandenhove could not resist, and integrated the work of Wuidar into some of his achievements which, as everyone know, leave the gauntlets of Swiss chalets open. (…)

[Translated from French with Google Translate]